Tea was introduced to Japan in the 9th century. It is widely believed Kūkai and Saichō (two Buddhist monks) brought tea seeds into Japan from China. In the following centuries, Japanese culture developed its distinctive process of shading and steaming leaves, a vital practice known to give Japanese green tea its rich, umami flavour. 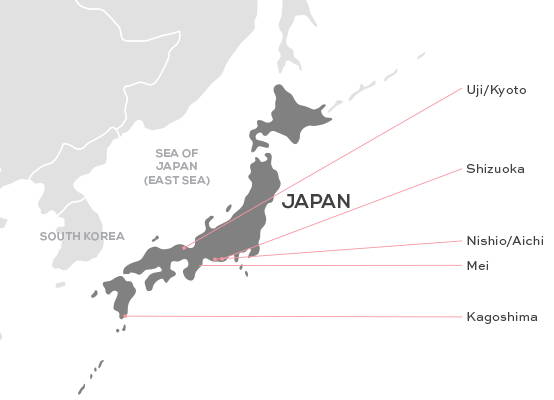 Shizuoka is famous for green tea, it is the largest tea producing region in Japan, with nearly half of all Japan’s green tea produced there. Shizuoka is the leading producer of Sen Cha and Sen Cha Fukamushi (Deep Steam treated).

Kagoshima is the second largest tea producing region of Japan.

Mie is the third largest tea region of Japan. It is famous as Sen Cha and Kabuse Cha.

Uji/Kyoto Uji in Kyoto prefecture is known for luxury tea production. It is a region mainly producing shade-grown teas such as Gyokuro and Matcha.

Nishio/Aichi Nishio in Aichi prefecture is one of the major Matcha production areas of Japan.